How much do you bet that as soon as the children go back to school the rain will stop & it will be about 80 degrees in the shade?

For years we have had Indian summers just as winter jumpers arrive in most high street shops which is why at Artichoke we always have a small transitional collection with items that you can wear as stand alone pieces in late summer, but they will work well as part of a layered look in the autumn & winter months to come.

We are also working hard at the moment to build a collection of different styles & shapes of shirts that are as individual as the women that wear them. We are known as the Jean Genies because we stock I think, nine styles of jean now & can find something in this mix to fit & flatter most women. We are working towards doing the same in our shirt collection, as we think that if you find a couple of shirts that fit you & you feel great in, in the same way as with the perfect pair of jeans, you won’t want to go off message, just have access to different prints each season.

As part of this campaign, we are this season, introducing you to three different shirts, The Grace, The Oxford & The Tallulah. 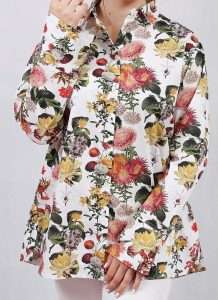 An oversized shirt is a perennial wardrobe staple. The Grace is a similar cut to our best selling Tessa Shirt with a split deep cuff that can be turned back.

It has a straight hem with a side split so can be worn tucked in or out, finishing at the top of the thigh. With a collar & button through placket, It has an inverted pleat at the back. Like The Tessa this shirt is the ultimate trans seasonal piece, it can be worn as a stand alone in summer & layered under jumpers & jackets in the cooler seasons.

We have named this beautiful piece after Grace Carnegie Brown, co-founder of the award winning online magazine Annabel & Grace 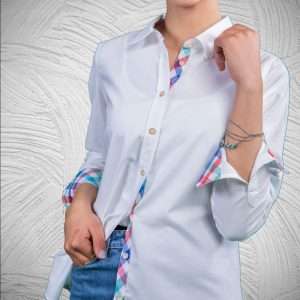 Despite it’s name The Oxford Shirt actually was first conceived in the fabric mills of Scotland in the nineteenth century where four fabrics were invented & named after British & American Ivy league universities, however The Cambridge, Yale & Harvard, it seems, did not have the same appeal & have got lost in the mists of time.

With it’s basket weave the fabric has a recognisable marled look & The Oxford Shirt is valued as much by women today as it was by the polo players of The British Raj one hundred & fifty years ago as it epitomises ‘The Preppy Look’ made famous by iconic american brand Ralph Lauren.

It is an essential piece in every ‘classic’ womans wardrobe 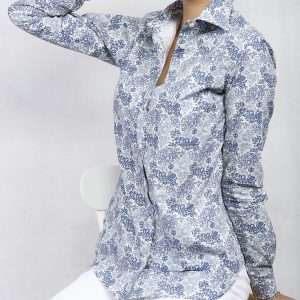 The Tallulah Shirt with its classic, semi tailored design epitomises the laid back elegance that we all aspire to. A great layering staple it will move through the seasons.

Named after Donna’s daughter & available in four fabrics it is almost as beautiful as it’s namesake.

In this week’s video Donna & Sarah show you how to style all three shirts, both now & in the months to come.

Everything that you see should be online but  if there is something that your life is incomplete without & you cant find it or indeed you would rather talk to a human being please give us a call on 01760 724948.

Be the first to know about our exclusive items and special promotions.

Be the first to know about our exclusive offers, new items and special promotions.